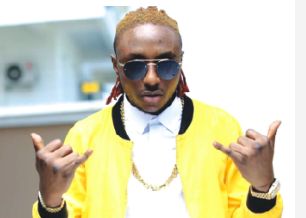 Do you still remember this talent? He suddenly went off peoples mouth, His name is Terry G, the Akpako master.

It has been a very long time now we here from Terry G, after dropping songs like “Omo Dada, Owo Nla” and so on.

He, now announces his coming album, which made most of his twitter followers drop words of insult to him, not minding the fact that Terry G is also a super star.

According to Terry G on his post he referred to Wizkid as not being “Wizkid” but “Wizking” also letting us know that he will be featuring Wizkid, A.k.a Starboy in the album.

According to his post: “He’s never to be referred as wizkid instead call him wizking, am listening to our collaboration in my coming album and the memories makes me glad……G 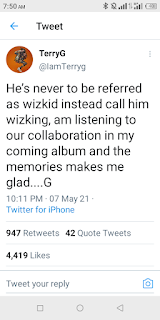 After saying this, some of his twitter followers threw insult on his post, most of them said, “Do you think featuring wizkid will wake back your career?”

Some asked him to go and feature Rema or Mayorkun. 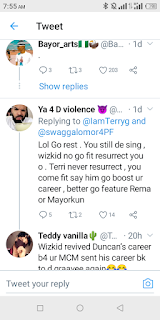 Are you ready for Terry G album? Or do you think Wizkid will resurrect Terry G as said in the screenshot after this album drops?

CHECK OUT  [News]See what happened to a yahoo boy at Ibadan, Nigeria.