Hi it’s a pleasure having you here I know you really love music and you really want to use your mobile phone to make simple tracks instead of going to a music studio to spend money on recording your tracks. Here in this article I’ll be guiding you on how to record a song using a mobile phone.

Do you believe you can use your mobile phone to record music tracks or are you still doubting it?

Using a phone to record songs had so much fun in it and very easy to do.

If still doupting it read this article to the end but don’t forget to live a comment below and share it.

Now before we move on I’ll would love you to listen to a track I made using my phone, its just some minute record.

So that’s the track i recorded using my mobile phone, dough I didn’t spend much time trying to fix everything I just did the recording and save, without editing my voice. It’s just like a play to you right?😂 sorry I never wanted to sing anything, it was just a rough freestyle recorded with my mobile phone.😂

I see so many comments online mostly on Facebook groups on the best app to use for audio recording or songs recording I put them through and they succeeded in making cool songs out of my tutoring.

I’ll show you how to do the recording and even expected you to do more than that.

Read also:How to buy and sell on social media without been scammed.

WHICH APP IS BEST TO RECORD MUSIC TRACKS ON MY PHONE.

The best app, software or application to use during audio recording I don’t know for now because on google we have many shown there, but am going to be using an app called “Tune me” and I’ll name just 5 cool apps that are also good for audio recording on phone but will be explaining on just one on this article, then explain the rest on the next article.

APP THAT CAN BE USED TO MAKE SONGS RECORDING ON A MOBILE PHONE.

You can get the above app listed on “google playstore”. You don’t just install them from play store I make use of them, but you needed just this 4 things listed below.

BEFORE YOU CAN MAKE SONGS RECORD WITH YOUR MOBILE PHONE HERE ARE WHAT YOU NEED.

Those are just what you need for recording songs with your phone.

Read also: Messages you should avoid on social media to avoid been scammed.

Android Phone: Don’t be confused when I called it an android phone, Android phone, can be your Taplet, iPhone and so on, but not a touchlight😂. E shock you abi?

Headphones: Before you can make record audio record using your phone you need a good headphone or earpiece, this earpiece here has to be the one that carries a mic in it for your voice capturing, without the mic you will end up recording nothing, that’s to say your job all will be a waste of time😁.

A free beat or beat: Here it’s all about going to the internet to browse on a beat which has no vocals in it, but most of this apps has already made beat that can be used to make good tracks.

A quite Environment: Imagine opening a studio in a market square😂 noise everywhere, it’s same thing here as making records with your mobile device.

You need a quite place where no one has to distract you make your self comfortable and then record the best in you. But be calming down😂 so you don’t make that type of wack freestyle i made.

HOW TO RECORD A TRACK WITH TUNE ME APP.

After app has been installed to your mobile phone we are now ready for a studio work, now ready to record a cool track, all you just have to do is to bring out that nice headphone or earpiece of yours plug it, open the app by clicking on the app icon on your phone desktop.

CHECK OUT  How to add download buttons on blogspot.

Wow Tune Me app is now open, how do you feel now? bad or you feel good?  OK let’s move on. After app been opened fully you just have to add up a freebeat so as we can make a record.

STEPS ON ADDING A BEAT OR INSTRUMENTAL ON TUNE ME.

It’s just simple adding a beat or instrumental on tune me app, but remember you need to download a freebeat from the internet, I guess you’ve already done that.

Now click on where you see “BEATS” Done? now  since its your first time using “tune me” app  for a music recording, you have to import the beat first before it can be used for making that cool song of yours. 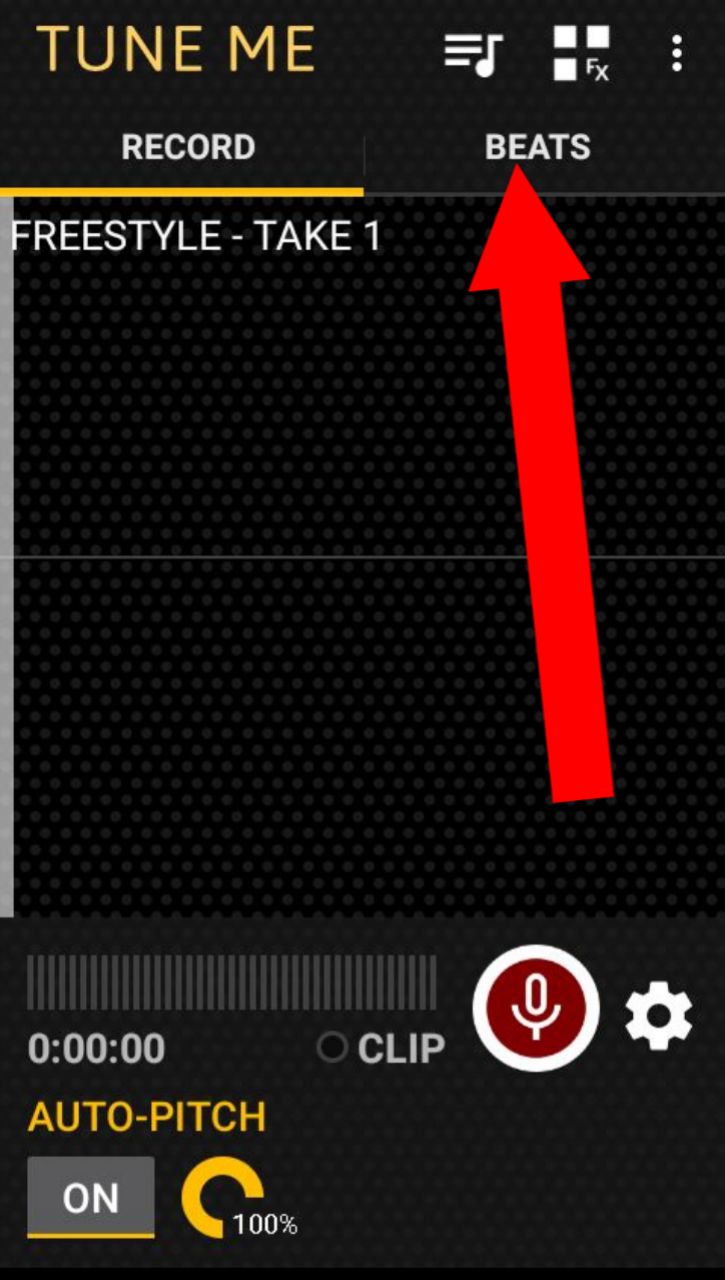 Now click on where you see “IMPORT” before importing the beat you can as well review the beat you wish to use by clicking on the play button there, wait on it to count from 1% to 100% then it will now role to the top and can be found at where you see written “YOUR BEATS” you’ve seen it right? click on the beat it will now take you to your recording dashboard. 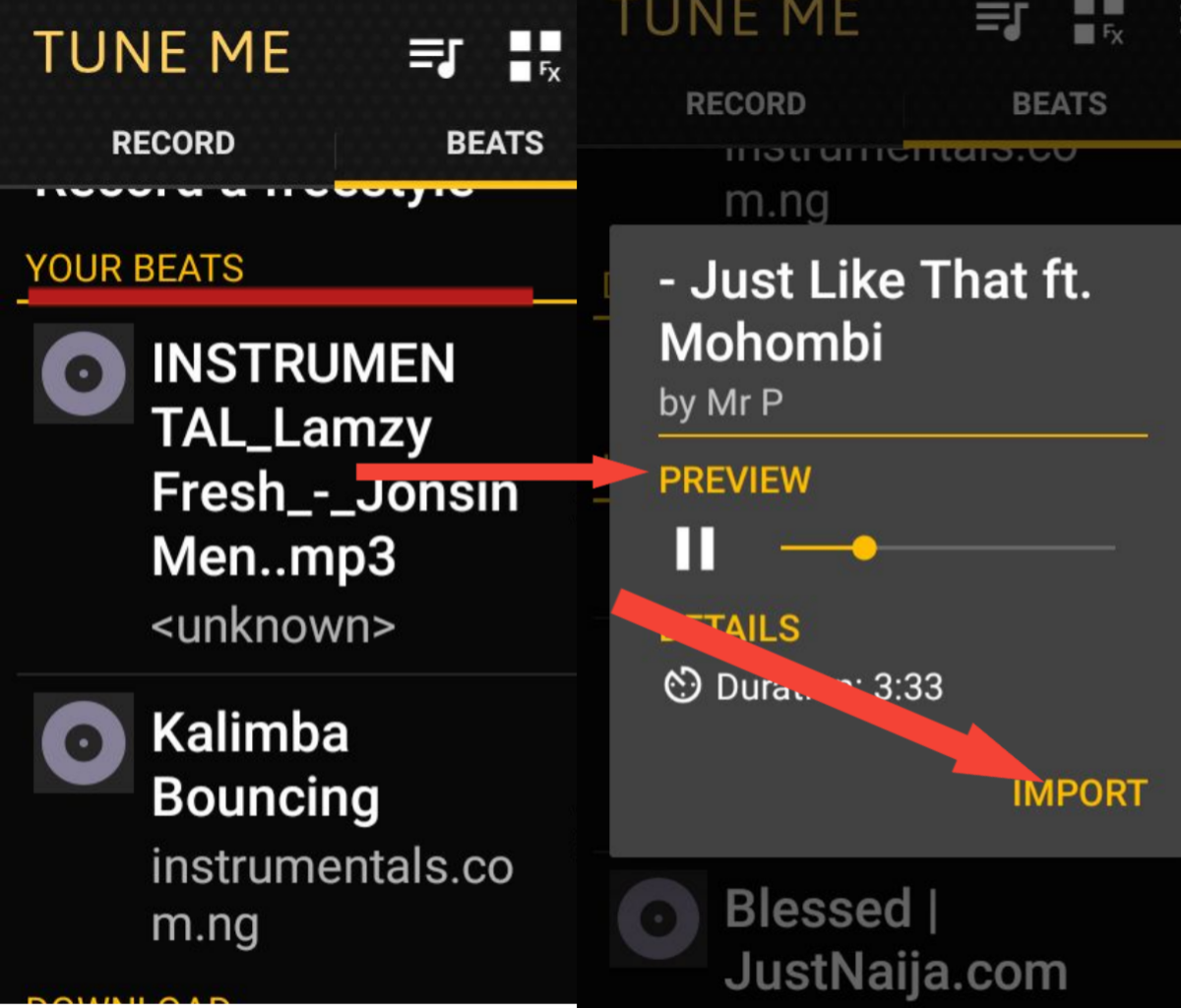 Hope you have your headphones plugged? because we’re about making a music track from “Tune Me”.

Now look well you can see a red icon there, hope you’re fully prepared? click on the icon, done? the beat is no playing and also its recording at that same process. Enjoy the moment. 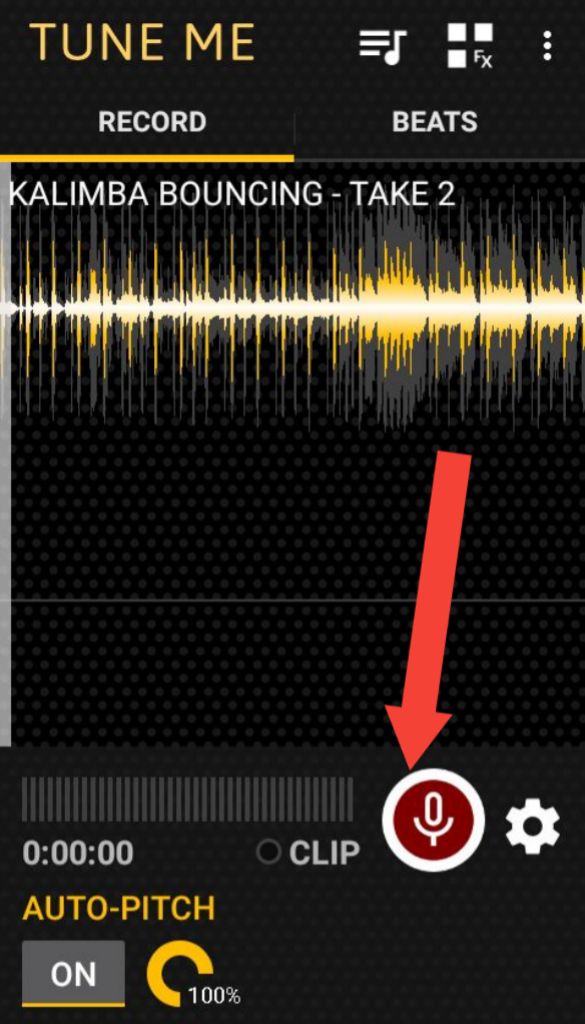 Are you done recording with the phone? Good job, now let’s proceed to voice rhyming with the beat and saving the track we just made.

Now pull off the earpiece or headphones, click on the “SYNC TRACKS” it will now start calibrating, allow to calibrate and don’t make noise when it’s pipping, I guess you got that.

You can as well adjust your “Mic & Gain also with the Key” by clicking the “GEAR” icon. 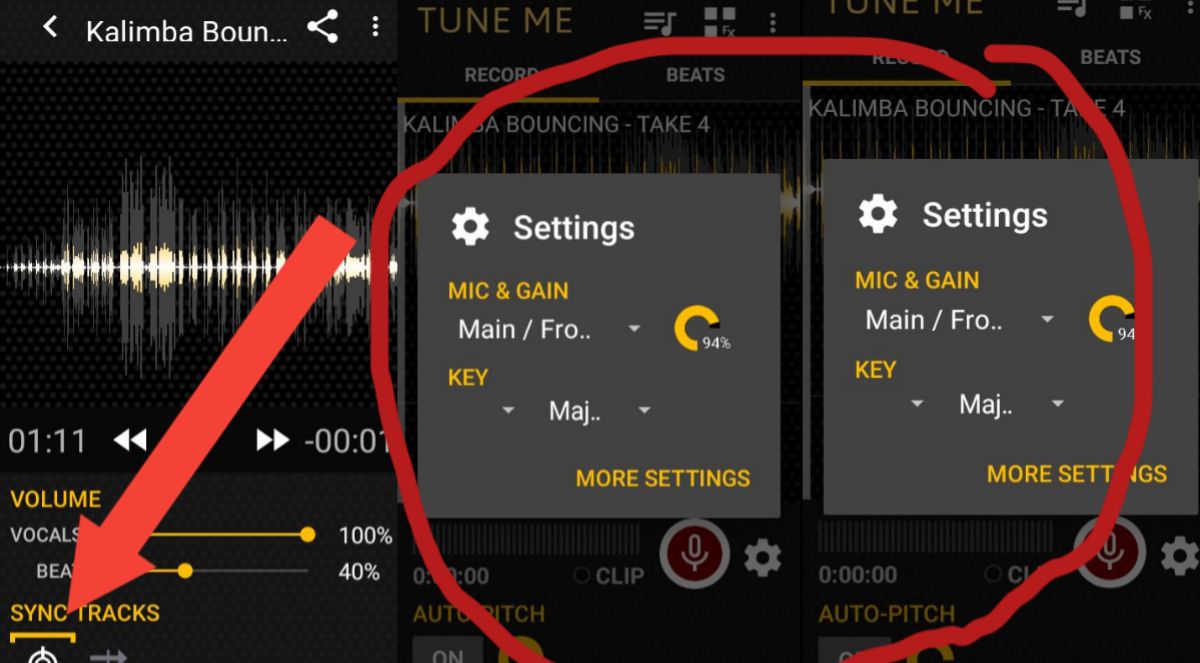 Let’s take a review on what you recorded and also saving your track so as to be added to your music files.

Now click the icon that has a three vertical lines and a music icon on it.

Read also: Things you need to know as an upcoming artist.

Your tracks made today are shown first, you can review them by clicking on them, hope you’re enjoying how to make songs with your mobile phone?

Rename the track to suit you choice name you want them to be by clicking on the three dotted lines by your right, click “RENAME” and then save. 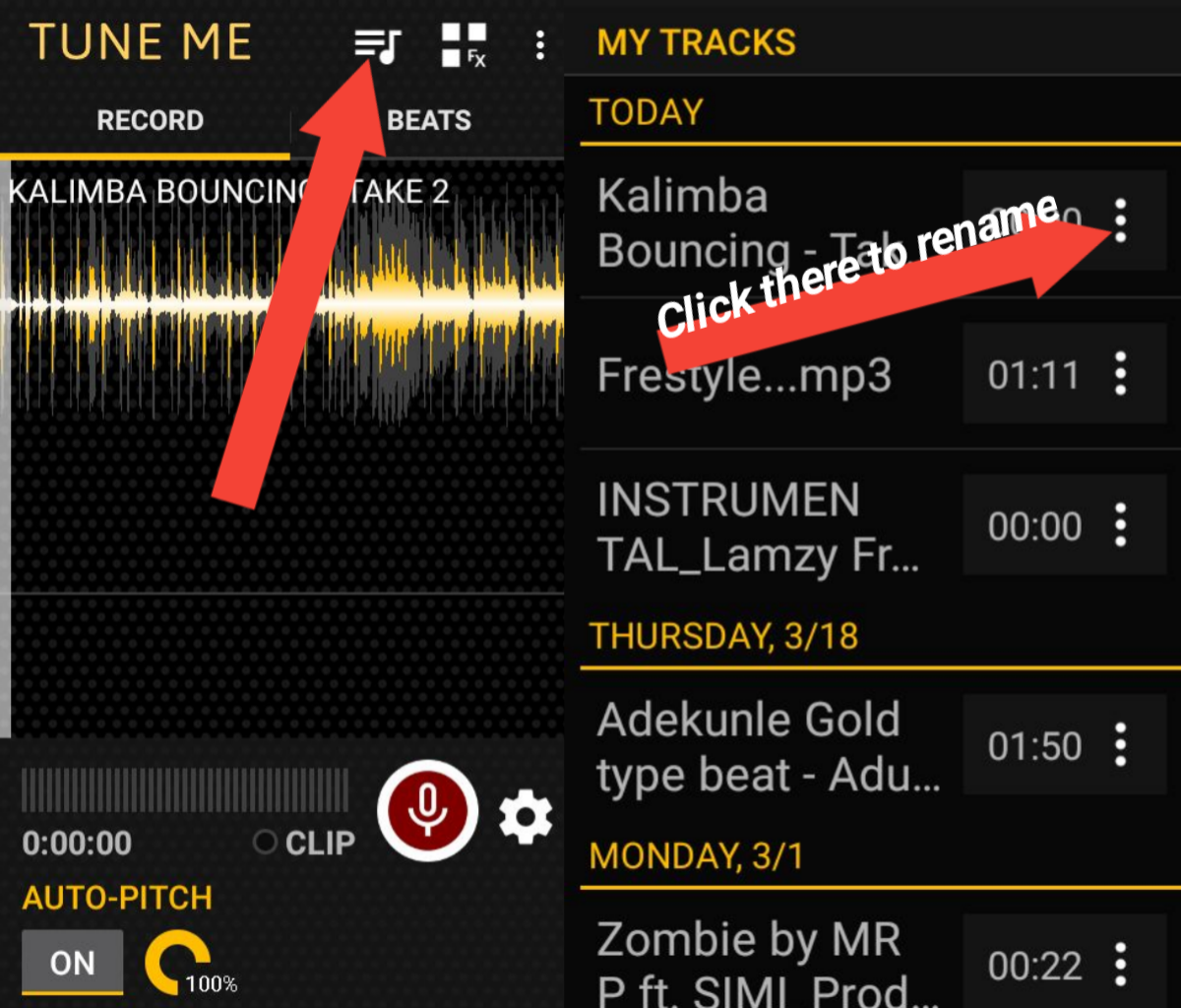 Let’s go to our file manager now and look for the track and play it for friends to congratulate us for making a hit song using a phone.

Go to your file manager click on “INTERNAL STORAGE” now look for a folder that has this name “TUNEME” click on it, you will see so many folder after you click, those folders consist of the track you’ve recorded with your phone and also the beats you added to tune me.

You can see that the folders has dates, look for the one that carries the date you recorded the track and open, there you will see the tracks you’ve made so far. 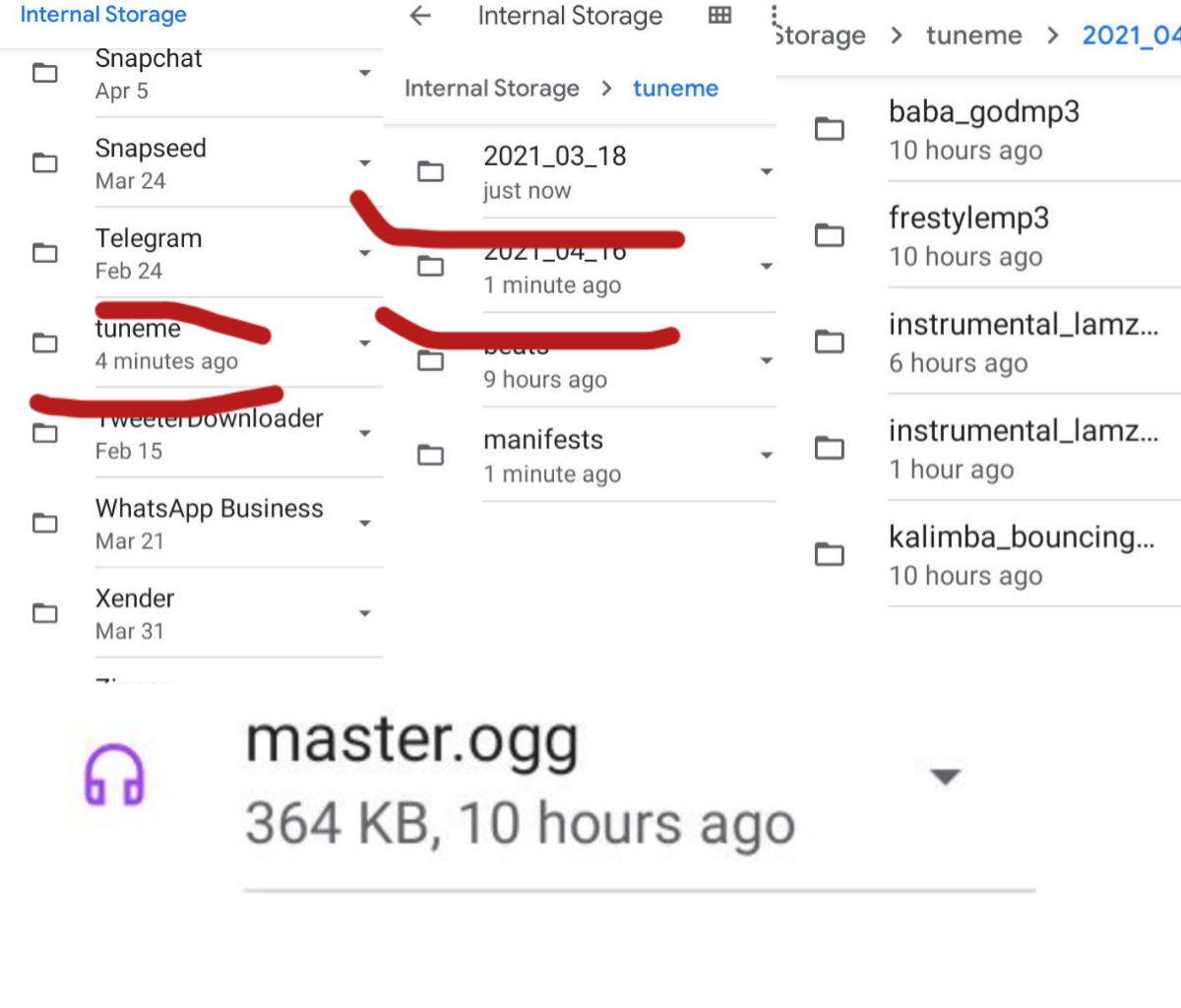 Let’s now change the audio format and name. Most of them are been saved as “master org” lets change them to your preferred name.

Long press on the track so as to be selected, after been selected, click on the three dotted icons by your right, click “RENAME” now change the end to .mp3 e.g (Mysong.mp3), maybe you r file manager supports the drop down icon where to arrow I pointing at, jus click once on it, and rename the song. now you can share to your friends and families, they won’t believe you actually made that song with a mobile phone. 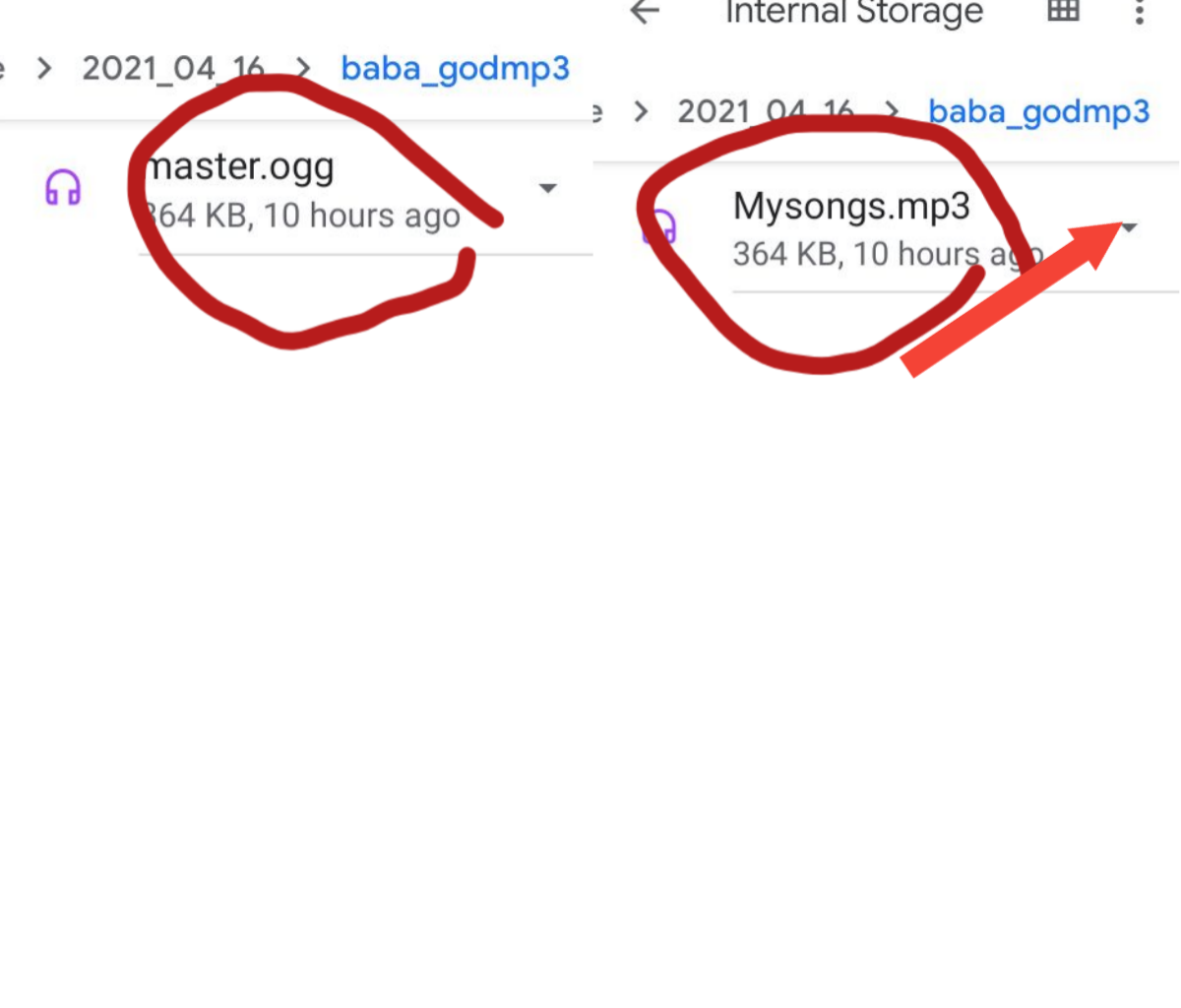 I really want so many music lovers to read this article😓

Most of them will be searching on How to make a song with my phone, and some might search on which app is good for song recording on my phone? but helping to share this will help so many people. Comment and hare this please.