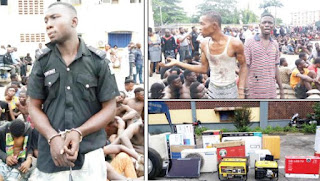 At least, six policemen were killed while 38 others were injured in Lagos State during the #EndSARS and #Endpolicebrutallity protests.

The state Commissioner of Police, “Hakeem Odumosu”, who disclosed this on 27th October 2020, said his men took into custody 520 suspects in connection with the Policemen’s killing and other criminal acts during the #Endsars protests.

“The protests which started peacefully turned violent on Monday, October 12, when some criminally minded hoodlums at the Surulere protest venue cashed in on the precarious situation” “They proceeded to attack the Anti kidnapping Unit’s Office of the command located at “Iyun Road”, Western Avenue, Surulere, with murder intention to liberate suspected kidnappers detained inside the facility.

“In the process, 3 of the policemen on duty were shot and injured while two suspects were allow to go,” the Commissioner said. Odumosu listed the murdered policemen as an Assistant Superintendent of Police (ASP) Yard Edward, attached to Denton Station; Inspector Olayinka Erinfolami, attached to the defunct anti kidnapping Unit; Inspector Adegbenro Aderibigbe, attached to Meiran Division; Sergeant Abejide Abiodun, attached to Operations, State Headquarters and two others attached to Orile Police Station. According to him, four civilians also lost their lives during the crises in the state.

He said: “Most importantly, 19-year old Olamilekan Ibrahim, who is among those that broke into a new generation bank and stole away cash and other valuables in Lekki, was arrested with N250,000, which is his own share of the loot from the banks, and a locally made pistol.

“Also, two suspects, Ebere Ruben age: 29 and Samuel Oyediran age: 16, were arrested by operatives of Rapid Response Squad (RRS) for their involvement in the burning of the BRT terminal at Berger and TVC Station in Lagos State, respectively, with left-over of some quantities of petroleum products with which they set the places on fire.”

The police chief said that, it was now a known fact that the protest was hijacked by armed hoodlums who had been responsible for a series of killings, arson and looting of many shopping outlets in the state.

CHECK OUT  News: Wizkid Album Is Topping 24 On UK Albums Chart, See The Position Of "A Better Time" By Davido.

Meanwhile, Governor Babajide Sanwo-Olu has read a riot act to miscreants and hoodlums in Lagos, urging them to be laws abiding and peaceful or face the full wrath of the law. Speaking during a tour to Fagba in Ifako-Ijaiye Local Government Area of Lagos State to assess the level of destruction of properties caused by last week’s ethnic clash between Yoruba and Hausa community in the area, Sanwo-Olu said the state government would be hard and very decisive on miscreants if they refuse to turn a new live.

He said: “The level of destruction that I have seen here is colossal; it is unfortunate. Enumeration would start immediately by the two local governments. The council chairmen and all the community leaders will come together and come up with a list of those whose properties have been destroyed.

“The security operatives are here; they can hear everything. We are using this opportunity to give notices to all the miscreants in the neighbourhood and that is why I am looking at you. “If you know that you are not doing any work and that you are one of the people that have caused this trouble, we are giving you the final notice because we are coming to clear this whole place.

CHECK OUT  FASHOLA DISCOVERED A CAMERA AT LEKKI TOLL GATE